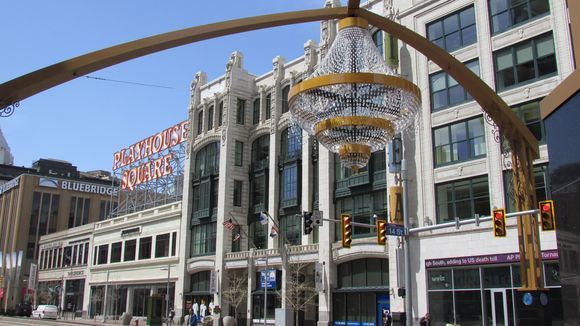 The world’s largest chandelier is in Playhouse Square. This is maybe a thing that we wouldn’t have if we didn’t simultaneously think so highly and so poorly of ourselves. Via.

I blog now, guys. Blogging is fun because you get to have even more conversations. Let’s see how long I can keep this up.

Ted, whose professional role includes attempting to convince clients to follow best practices from other cities, emailed me the following question (in response to this):

Why is this? [That relaying best practices to Cleveland leaders feels futile.] Not that I doubt it–it’s present to a certain extent in every city/region I’ve ever known–but is there something that makes it demonstrably worse in Cleveland? I know your series of “Cleveland is a city, also” stuff… does Cleveland seem to have any goal for itself? Like, it acknowledges that it’s in a rough spot and wants to recover like Pittsburgh? Or at least a negative goal like “let’s not totally decay into Gary/Trenton”?

This is the question. I keep coming back to it: Why does Cleveland believe so deeply in its present Clevelandness that it’s straight unwilling to consider and learn from things that have happened in other places, or even in its own history? And what, exactly, is that Clevelandness? (Last year, I wrote about the identity, or lack thereof, of Cleveland’s food scene, which is a microcosm of this line of questioning.)

The rejection-of-best-practices thing is, of course, not formally stated policy. It’s a cultural tic that I’ve noticed since moving to Cleveland. Its existence has been reinforced by the observations of other people who have spent more time working and living there than I have. My firsthand experience with it has come largely in meetings, in which I will say something like, “In D.C., we did X when Y happened,” and someone—with more decisionmaking power than me, sometimes employed by the administration or sometimes working adjacent to the public sector—will respond with, “Well, that’s D.C.” This is a bad response, but I will grant that D.C., and San Francisco, are not Cleveland.

However, we are increasingly lapped by a ton of other cities. No city is perfect, and obviously, there are likely boatloads of local issues in [insert any place here], but I do feel that the needle is moving a bit and some cities are taking the lead on projects that reflect emerging best practices for livable, safe, and healthy places. The most compelling of these seem to implement infrastructure in fast, flexible, noticeable ways. I’ve mentioned Memphis here before, because I am really impressed with Mem-Fix, but Detroit’s pink zones are another good example. We know that parking and driving is bad, and walkable places are good; Buffalo eliminating parking minimums is a good example of overhauling policy to reflect proven research.

Meanwhile, Cleveland is balkanizing itself. I will say, again and again, that there is good work happening here. But this post isn’t about good work—sorry! It’s about the highly prevalent mentality of Oh, that won’t work here, which gets in the way of even more work. Parklets? Flex posts? Iterative planning processes? A bus network redesign? A bikeshare system robustly funded by the city in which it exists? I’ve heard all that stuff won’t work in Cleveland, and no one’s ever given me a real reason why it won’t work, so I have to assume that it won’t because we think it won’t work because we live in Cleveland, which is a completely asinine self-perpetuating cycle grounded in literally nothing but the assumption that we’re either not good enough or too good to be true.

At its base, “it wont work here” is a highly convenient party line to avoid trying new things, which can be: hard, politically challenging, unconventional, unpopular at first blush, not fun, not easy, etc., etc. Change is hard. You’re going to make someone angry. They might be really vocal about it. The flipside is doing nothing at all, or feigning as if you’re doing the difficult work of changing things. I understand how that is much more appealing. Which is why, Ted points out, you encounter shades of this attitude pretty much everywhere (see Alon’s comment for more on this). It’s a total kneejerk reaction to anything that looks, you know, hard.

And, sure, every place does have its particular qualities. Cleveland, for example, has about a community development corporation per neighborhood, which is extremely unusual. But that just means that Cleveland has about a community development corporation per neighborhood, not that something that worked in Memphis, Cincinnati, or Pittsburgh definitively won’t work in Cleveland. And yet, in my experience, Cleveland puts its Clevelandness so far ahead of anything else that Tim started an ongoing phrase for this, “Cleveland is a city, also.” We use it on Twitter, when another city does something that we could, you know, do—if we had an administration that wanted to push forward the kind of people-friendly policies that could improve quality of life, health, and spur useful economic development, rather than chasing weird token projects. Cleveland is already a punching bag, and despite the city-on-the-rise narrative perpetuated by downtown leaders, it’s hard to feel like Cleveland is moving forward with any particular ethos.

I’ve started referring to this as “Cleveland exceptionalism.” It’s probably just as much provincialism. I don’t think that Cleveland fully accepts that it’s in a rough spot—or, it thinks that it’s in such a rough spot that it’s irredeemable, and that only super-special silver bullets are the cure. Publicly funded sports stadiums are not proven to drive economic development in any city, but good goddamn will the Q save us all, is what the official line from the county and the city would have you believe (meanwhile, in Pittsburgh and Cincinnati).

I think Ted nailed it: Cleveland doesn’t have a goal for itself. There are many, many dedicated people and organizations working their assess off on goals for Cleveland, but I don’t think Cleveland is setting out to be anything at all. What would it look like if we decided we wanted to be the greenest city, the most bikeable city, the post-industrial city that managed to close the equity gap? What if we wanted to be the healthiest city? What if we wanted to be the most affordable city with the highest quality of life? Some of these things sound silly, but I would love to live in a place led by an administration that loops back that kind of goal into the work that it does.

I cornered Richard Schragger at the Hometown Summit to ask him about this, and he told me that until the leadership in places like Cleveland shake off the reflex of responding with “it won’t work here,” nothing will, you know, actually work here. It’s that simple, but accomplishing that—putting aside your ego, checking business-interest backers, refuting long-held cultural tropes, and being willing to take criticism—is the biggest challenge Cleveland faces.

ETA: I feel as if Richey Piiparinen’s Rust Belt shame thesis plays into this. I am not of the Rust Belt, so I am only on the fringes of this this feeling. I do not feel any shame for Cleveland’s decline, just a lot of undirected rage toward its unwillingness to wrangle with itself. I got to talk to a number of Akron’s luminaries at Hometown, and we discussed the sentiment around the Rust Belt. For Akron, it seems as if people are so down on their city’s past and present that they think they don’t deserve nice things, so they don’t know what to do when they’re presented with something new. I think it’s different in Cleveland. Per Piiparinen:

The problem is that many cannot let go of the past. They have gone from being proud of being part of the “Arsenal of Democracy” to being stubborn that we still retain this status. This is particularly true for the region’s leadership, which hangs onto the illusion that yesterday will occur again as long as we adhere to the same thought processes and power structures that held during the region’s heyday. But yesterday doesn’t happen. Year after year, it doesn’t happen. Pride becomes desperate. What the leadership really feels is not pride, but shame at how the region has stumbled.

I think this shame has straight calcified into an unwillingness to hear criticism or look outside Cleveland for solutions. That’s toxic. Kevin just pointed out on Twitter that “the sole benefit of being a late mover is the opportunity to learn from other places. Ignoring them and reinventing the wheel helps no one. It’s like shooting yourself in both feet.”