Because no one wants to squander a sunny, 50-degree day in January, and because a few of us (ahem, me) haven’t ridden our bikes any reasonable distance in awhile (well, there was that long haul to Lost Rhino in December but, you know, I can do better), Kevin, Ryan, Brian, Mary, Ed, and I took off on the Leesburg loop on Sunday.

I had a really lovely Sunday. Many thanks to Mary and Ed for allowing Brian, Ryan, Kevin, and I to crash their ride, since clearly all of us wanted to get out on our bikes but didn’t want to plan anything—and for taking photos! M&E are the best ride photo-takers. Great company, great coffee, great pizza, great weather, and a great way to spend a nice January day.

Last week, I was on Atlantic Cities, writing about Spike Jonze’s new film, Her. The atmosphere and setting—future-ish L.A.—is really lovely and depends heavily on the use of public transit. I haven’t written about pop culture in awhile, and I’m really pleased with how this turned out. Read it here.

Thanks to the many people at Transportation Camp and in my life who said nice things about the piece. I understand traffic, the Internet, and what kind of writing gets traction, but I’m still amazed that it’s been as widely read as it has. I hope to do more of this stuff!

Transportation Camp is great. It’s just…great. I’ve been disappointed by the American Planning Association conference and its surrounding events so many times that by the time Transpo Camp rolls around, I forget that it’s possible for something referred to as an unconference not to suck. As an experience, Transpo Camp is enjoyable and does an amazing job of not prioritizing tech or transportation over one or the other, but it’s also phenomenal networking: It’s a great way to talk to everyone you want to meet that’s attending the Transportation Research Board meeting, especially if TRB is too pricey for you to attend.

Also, a bunch of people I really, really like personally are guaranteed to be there, and what better way to spend a Saturday than hanging out with friends who share all of your niche interests?

I proposed a few sessions and got looped in on another, ultimately presenting at two. I’m very pleased with how both went. I’ve got some follow-up to do on my marketing session—I collected emails and have some notes and comments to get to that group, so please stand by—but I’m so, so proud of it. I’ve run sessions, discussions, and presentations at various events before (including Transpo Camp; last year, I did a thing on women and bikes) and am generally OK with speaking in public, but I felt really confident in moderating this discussion and making sure everyone who wanted to got a chance to speak, and I think I brought some good content to the table. There’s absolutely ways I can improve,* but no one walked out (which is incredible, because sessions at Transpo Camp are basically structured to be walked out on so that attendees can maximize their time) and everyone in the room was able to share their grievances and successes. 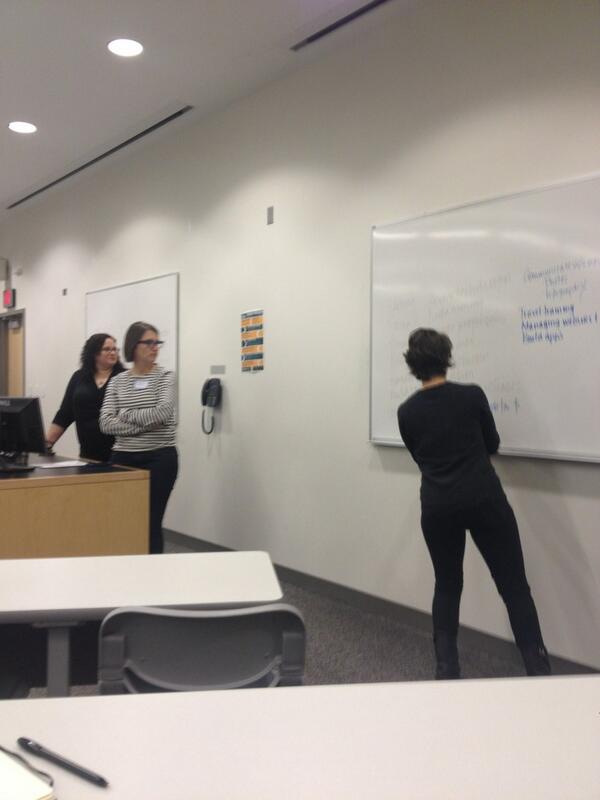 I asked everyone to introduce themselves and say one thing they are tasked with doing during their average workday. Too often, we see marketing and communications jobs described with broad, buzzy, empty phrases like “work across platforms,” “satisfy organizational goals,” and “reach audiences.” Like, yes, most humans with the ability to think critically are also capable of doing all those things—but they give absolutely no indication as to the actual kind of work communications and marketing people do. Answers ranged from “draft and send emails” (mine) to “translation,” “review contracts,” “post to social media,” “take photos,” and “listen to Pandora.” Photo via @jpvelez78

Jaime Fearer, Matt Johnson, and I ran an afternoon session on blogging with policy goals in mind. Jaime and Matt talked about Greater Greater Washington, and I talked about the WABA blog. We were able to answer a lot of really smart questions about blogging, from some of the technical aspects (what CMSes we use, how we source content, how we schedule posts) to the more conceptual stuff (how we approach the digital divide, how we word things, why we use blogs instead of websites or social media). If you have any questions about anything related to this stuff, I’m happy to answer them; making the WABA blog into something legitimate was a goal of mine when I started, and I’ve achieved it. I don’t know everything, but if it’s helpful, I’d love to share what’s worked for us. 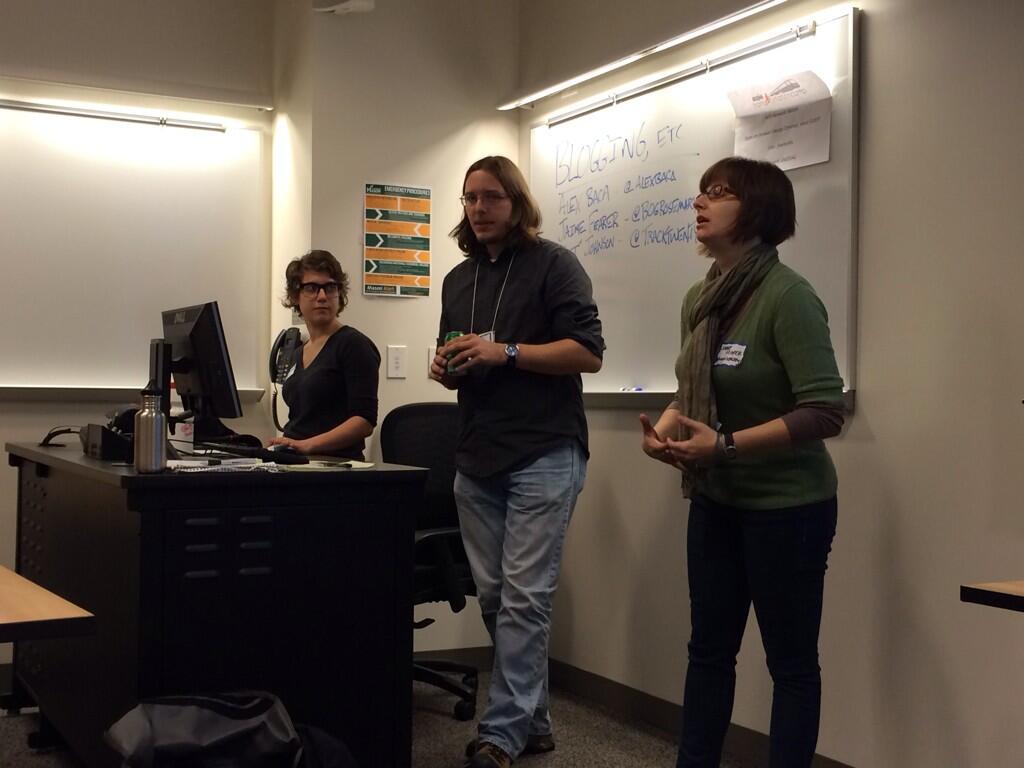 I attended Ashley Robbins and Andrew Austin‘s session on making buses sexy (I’ll post my notes in a subsequent post), and a session dedicated to visualizing connections and turning them into concrete actions, i.e., networking. It was a great opportunity for me to tell everyone that I’m looking for a job, particularly in transportation, in San Francisco. It was also terribly embarrassing, because I didn’t have any business cards. So, hey, are you based in San Francisco and hiring? Hire me! My resume’s here, my LinkedIn’s here, and you can reach me at lxdlnbc@gmail.com.**

I’ll be at Andy Palanisamy‘s tweetup at Open City tomorrow (it starts at 5 p.m.), and then I’m headed to the Transit Oriented Beer happy hour (part of the San Francisco Bay Young Professionals in Transportation), this time with business cards. If you want to get in on some of the TRB action without going to TRB, I suggest stopping by those events or figuring out what else is going on around the conference and dropping in. Transportation is a field that I can’t say enough good things about: Everyone I’ve met that works in it just kicks major ass professionally and is a genuinely wonderful person personally. Maybe next year I’ll be in a position to attend TRB itself.

ETA: This delightful photo is from the post-Transpo Camp #transitnerdherd dinner. #transitnerdherd is an ever-expanding squad of those of us who are friends and do transportation-y things. We first got together on a planned trip in 2011, riding the Capitol Limited back from Minneapolis (I blogged about that, but it’s disappeared), and the hashtag has taken off since. These are the people I’m very happy to see at Transpo Camp. 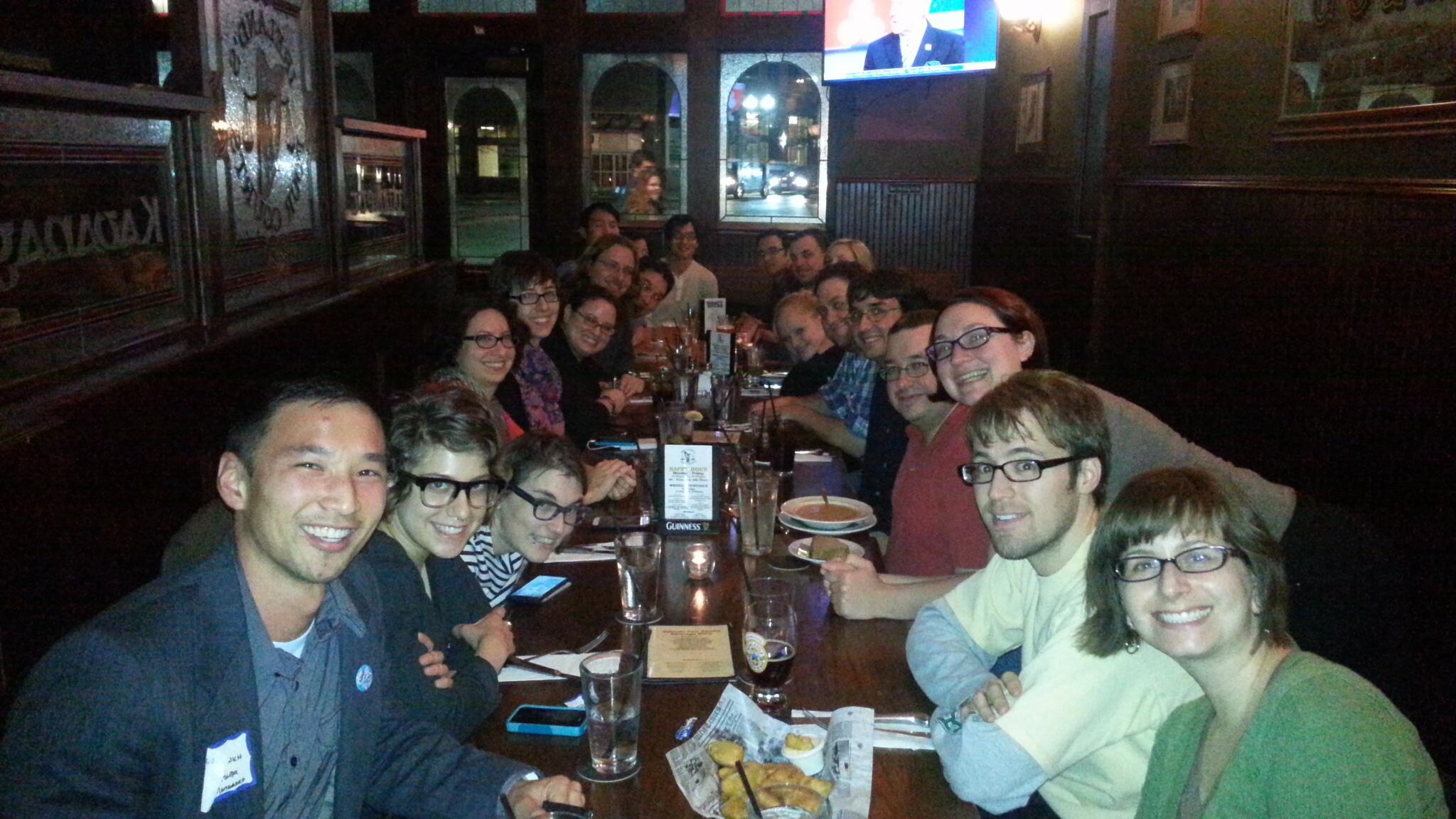 *Maybe by, um, preparing—I didn’t even have an outline. Or maybe that was for the best! I am still not sure. Kendra and Ashley were kind enough to stand up at the front of the room, because I was late, and were there throughout the session with me to fill in gaps in conversation while I was furiously scribbling stuff on the whiteboard (thanks to Mauricio for the major assist in procuring more markers).

**I am being completely shameless about this because being completely shameless about searching for employment paid off in the past. Anyway, I’m taking a UX design class through General Assembly that runs through April and it cost $$, so I’d like to get through that and be in San Francisco by May. Again, my resume’s here, my LinkedIn’s here, and you can reach me at lxdlnbc@gmail.com.